Around this time last year, I got my Brother ST150HDH so I could help out in facemask sewing efforts, and after a few masks I decided to take the plunge with sewing garments.

My first garment was the Seamwork Orlando, which is a t-shirt pattern. I'm very glad I chose a Seamwork pattern because instructions were much more thorough and basic than many other indie patterns or any of the Big 4 patterns. Even with the extra instructions, I still ended up making many silly mistakes like not realizing I needed to flip the sleeve pattern piece and ended up with 2 right sleeves.

To celebrate my first year of sewing I decided to make this garment again (especially now that I have a serger), and marvel at the differences.

And I also have some wisdom to impart...

Everything will feel unbearably slow at first. You will get faster.

If you are a sewing beginner and it feels like an eternity to trace, cut, press, just remember of the first time you learned some other skill — cooking, baking, gardening, heck — even cleaning. When you first start to do those things you feel like the slowest being on earth; it might take an hour just to do something simple like chop up vegetables. But the more time you spend on it, the faster you get, the easier those skills become. Sewing is no different. Pressing becomes second-nature, cutting out fabric pieces starts going by much faster as you gain confidence and practice.

Be Patient with Yourself

With the new skillset of sewing comes an entirely new vocabulary that sometimes makes sense (e.g. top-stitch) but sometimes it doesn't (e.g. ladder-stitch). And to make things extra fun, some of that vocabulary is regional (e.g. snaps vs. poppers, seam-ripper vs. unpicker).

My second-ever garment was an incredibly over-ambitious silk blouse from Style Arc (a pattern maker that provides very minimal instructions). That blouse turned out about as well as you'd expect; it's unwearable. I remember spending at least a few hours figuring out a) what the button placket was called and b) trying to find an instructional video for sewing it, as well as some other complicated elements like the sleeve cuffs. I ended up finding great resources I still rely on to this day, but the process of figuring out that the place where the buttons go is called the placket took a lot of time and was humbling.

No matter what level of perceived knowledge you come into sewing with, be patient with yourself, be open-minded, don't let yourself get frustrated with not knowing something, or not being able to find information on something. If you can, find a community that you can tap into for help and resources (whether it's Reddit, Discord, or a local sewing circle) - I've learned so many techniques and other things from fellow sewists, and the internet makes that easier than ever!

Perfection is the Enemy of the Good

There's a parable of a pottery teacher who splits their class up into two groups - one is instructed to make as many pieces as possible and will be graded on the number of pieces they created, while the other half of the class will be scored on the quality of the pieces. At the end of the semester, the "quantity" group ended up making the better pieces because they went through trial/failure rather than worrying about perfection.

In some of my earlier pieces there came a point where I knew the garment was messed up beyond repair. For example, I'd cut out a piece wrong and didn't have more fabric, or sewed it on backward using the serger and wasn't able to seam-rip and re-attach because part of the fabric has been cut off. There was quite a lot of failure pieces that I don't even include in the 34 total because they weren't remotely wearable.

As a recovering perfectionist, I understand how much it hurts to know your garment won't be "perfect", and it's hard to power through to finish it and make sure that I got the experience of finishing all parts of it, even if one (or more) part was messed up. But ultimately, that practice provided me a ton of value and helped make future garments better. So, stick with it, even if something isn't meeting your standards (I got a whole lot of other stuff to say about setting too high standards, but that's a blog post of its own).

Do you remember the first garment you made? Have you ever tried to re-make it? What advice do you have for beginner sewists? Leave a comment! 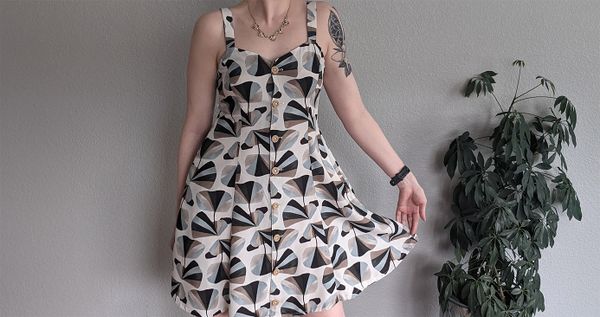 M8177 version A sewn in a cute neutral rayon challis. 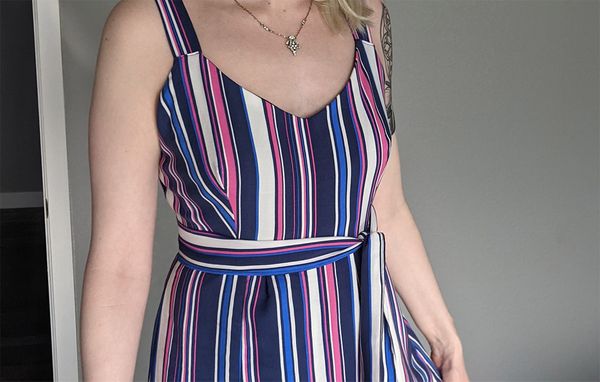 I combined features from two patterns - M8105 and VikiSews Polin - to create the perfect summer dress. A stripe-y start to springtime sewing!